Lyme disease as a result of a tick bite is a well-known phenomenon in humans. Lyme disease is one of the diseases that can be transmitted by a tick. Tick diseases are increasingly common in the Netherlands. There are often several vague complaints when someone is infected by a tick. In certain regions of the Netherlands, especially the wooded areas, you can also regularly find a tick on your horse. Can this also have consequences for your horse?

Lyme disease is not caused by a parasite but by, among other things, a bacterium: Borrelia burgdorfi. This bacteria is transmitted by ticks. Depending on where the tick is found, up to 75% of the ticks may be infected with the Lyme bacteria. The longer the tick is, the greater the chance of infection. Because ticks are often not noticed, the symptoms are not noticed until late and only discovered when it is already chronic.

A number of ticks occur in the Netherlands. The most common tick is Ixodes Ricines. The life cycle takes tu

between two and three years. During this period, the larvae, nymphs and ticks do not spend more than 3 weeks on the three different hosts. The rest of the time is spent at the bottom of the forest. Active adult ticks are generally a bit higher in the vegetation to be able to sit on a passing horse. The ticks are most active in spring and fall. The Ixodes ricinus tick can transmit the bacteria Borrelia burgdorferi. Research by the University of Wageningen showed that in 2006 average 23.6% of the Dutch ticks were infected with the Borrelia bacteria. The female is usually larger, so it is soon discovered. The male does not absorb blood and therefore cannot transmit diseases. The theory that the risk of Lyme disease is many times smaller if the tick is properly removed within 24 hours is now much outdated.

Other important ticks are Dermacentor ticks. These normally live in somewhat warmer areas, but have also been seen occasionally in the Netherlands in recent years. The adult ticks are particularly active in the spring and fall. This tick prefers to live on vacant areas around cities and on neglected pastures. This tick is the transmitter of the disease babesiosis.

Ticks are often mainly found on the lower legs, abdomen, groin and chest. The tick can damage and irritate the skin there. Sometimes it is also painful. After the bite, a scab can form, sometimes it is even warm, swollen and sensitive.

The tick bite itself often does little harm. Problems can arise when diseases are transmitted by the tick. Lyme disease (Borrelia burgdorferi), Babesiosis and Ehrlichiosis are tick-borne diseases.

What to do with a tick bite

It is very important to check your horse carefully when you have been in a place with a lot of ticks, such as in a forest. When the ticks are removed immediately (within 24 hours), the risk of infection is smaller. When the tick has been removed, it can be sent for examination to determine which tick it is and which infection the tick may be carrying. It is also important to remember the location of the tick, as this may be important for further investigation.

The tick tweezers are opened on the skin placed above and below the tick’s head. The tweezers are closed and the tick is removed in a circular motion. By removing a tick with tweezers, it is prevented that the body of the engorged tick is pinched and often the head remains. Anesthesia with alcohol is undesirable, because a tick can then empty its stomach contents. Tick tweezers are available at the practice.

Diseases due to a tick bite

Lyme is caused by, among other things, Borrelia burgdorferi, a pathogen that resembles a bacterium.

The first symptom of a possible infection after a tick bite is visible in humans as a red circular spot that starts to spread. We usually don’t see this in horses, because of the coat. Complaints may arise at a later time. The clinical signs of the disease are associated with nonspecific symptoms in both humans and horses. The following symptoms can be seen: variable lameness, stiff thick joints, fever, tender muscles, chronic weight loss, lethargy, behavioral changes, neurological symptoms. The complaints can be very diverse.

A possible explanation for the wide variation in symptoms is that Lyme disease can occur in combination with another disease that is transmitted by the tick, such as ehrlichiosis. Within the group Borrelia burgdorferi there are also different types that cause different symptoms. Furthermore, a large German study has shown that the spirochete (spiral-shaped bacterium) ‘Borrelia Burgdorferi sensu lato complex’ is in the DNA of mosquitoes.

The tick Ixodes ricinus can transmit the blood parasite Anaplasma phagocytophilum. Equine ehrlichiosis causes a clinical picture with fever, poor eating, lethargy, muscle pain, fluid under the abdomen and thick hind legs. The horses sometimes don’t want to walk, and can be atactic. Mild anemia can be seen in the blood, as well as a shortage of platelets and a shortage of granulocytes. Horses younger than 3 years old become less ill from this infection than older horses. The disease can be detected with a blood smear and by demonstrating an increase in the antibodies.

Often the horses recover themselves within 7 to 21 days. The disease can also be more serious. Then an antibiotic treatment is necessary and the horse needs supportive treatment.

A condition that we see more and more is Piroplasmosis or Babesiosis. The tick that transmits this disease is becoming us in recent years 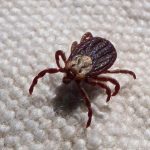 l seen in the Netherlands. In addition, the tick can enter our country by transporting horses from abroad. The condition is caused by the blood parasites Babesia caballi and Theileria equi. These parasites are located in the red blood cells. The incubation period is 5 to 21 days. In the first stage, infected horses show a high fever, severe anemia, chest tightness, yellow mucous membranes and fluid retention. Subsequently, there may be weight loss, fluctuating fever, fluctuating appetite and reduced performance.

The diagnosis can be made by blood smear and an increase in the antibodies in the blood can be seen from two weeks after the infection. The parasite itself can also be found with a special test (PCR). Treatment consists of giving the drug imidocarb, which kills both types of blood parasites. In case of severe anemia, a blood transfusion is sometimes necessary.

Red spots and rings that can develop after an infection do not always occur and are therefore not indicative of infection.

Tests are also being developed in which the presence of Borrelia itself can be demonstrated. This requires, for example, a biopsy of the skin at the tick bite or of a joint. The sensitivity of this test is not yet well known in the horse. The diagnosis is only certain when it is known that the horse has been infected with ticks, the horse shows (multiple) symptoms, the test is positive, other disorders are excluded and the horse responds well to the treatment. When the blood test is negative, it does not mean that there is no contamination, as it can be a false negative.

Click here for more information about Lyme disease in humans.